Linda found a place in Hollywood where you can order full-sized cardboard cutouts of famous people. There are more of Marilyn Monroe than almost any other celebrity. We chose the one of her from “Bus Stop” since it’s the shooting of that movie that provides some of the background for “The Alexandrite.”

We had a book launch party and Marilyn was there. Everybody appreciated it almost as if it been the real her.

That was a little over a week ago.

Marilyn is still with us. She doesn’t take up much space, being basically two-dimensional, so she’s still… here—living with us. We come around a corner and there she is.

There’s nothing frightening about the look on her face, but there she is, full sized—a person standing in the living room, or around the corner on the porch (we move her around from time-to-time).

Marilyn was a medium-sized woman. She’s wearing high heels, but she’s not as tall as I am, a little taller than Linda. There’s nothing threatening in her pose. I’m a grown man. You wouldn’t think a woman standing on the other side of the room would be so disquieting. But, I don’t know, she is.

The problem is that I like her. The look on her face is friendly, not sexy, just friendly, innocent. She’s easy to like. Having done tons of research on her for “The Alexandrite,” part of me likes having her around. I don’t think it’s going to turn into one of those weird “Twilight Zone” kind of stories, where I start to have a relationship with her—talk to her, and so on. Linda’s very common-sensical. She’s certainly not going to do that. She likes her too. It’s kind of special having as a constant, undemanding houseguest, Marilyn Monroe.

Still, Linda and I both wish she would stop scaring us that way. 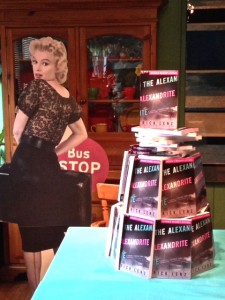