When I was twenty-five and he was forty, I saw Charles Aznavour at The Alvin Theatre on 54th Street, a half a block west of Broadway in Manhattan. It was a matinee. The theatre was sold out. 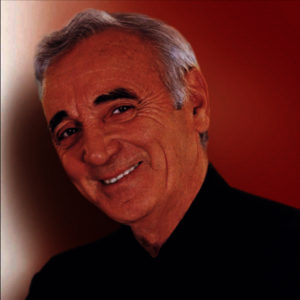 I was there because a couple of months earlier I’d seen the new wave movie, Shoot the Piano Player, in which Aznavour was the lead. Then, a week before I saw his live show, I was walking down 54th Street one day and saw Charles Aznavour. I guess he was on his way to the theatre. I was six-feet-four; I towered over him. As we passed each other, he looked up at me and gave me one of his open, twinkly, friendly smiles.

I turned around, went back to the Alvin box office and bought a ticket to a matinee. I was lucky enough to get a single in the seventh row.

On the day of the show, when the curtain went up, I was first struck by how huge and empty the stage was. There was nothing on it but a straight back chair and a small table.

Aznavour made his entrance. On that stage especially, he was tiny, miniscule. His presence, however, was huge, immense. I have never before, and don’t imagine I ever will, see a show with that much raw emotional power.

Tonight, with my wife Linda, I saw a video of a concert he gave at Carnegie Hall in 1995 at the age of seventy-one. I don’t think there was one bit less energy than when I’d seen him at the Alvin thirty years earlier (over fifty years before this writing). He was vibrant, aglow with passion and energy, the very definition of joie-de-vivre. Near the end of the nineteen hundreds, he was named Entertainer of the Century by CNN, and users of Time Online around the globe awarded him the same honor. He edged out Elvis Presley and Bob Dylan.

At one point tonight, Linda asked me if he was a good actor. Then almost immediately she said, “Oh, I already know the answer to that, don’t I?” Aznavour doesn’t just feel his songs. Like the best of the best singers, he inhabits the role he’s written for each of his heartrending musical stories like the finest actor inhabits a role. He is riveting.

I googled him after the show and saw that on this night, tonight, a few hours ago, November 4th, 2017, he performed live in Vienna at the age of 93. I looked up his schedule. He’s booked through next March. Having read about him before, I know he’ll be calling his manager, or whoever, in the near future and he will tell that person (in French, I guess, but who knows; he speaks—as he writes—in many languages), “Hey, Louie! I don’t have anything for April and May.” And of course, Louie will get on the stick and start booking the diminutive king of entertainment through to the end of 2018.

When Linda and I finished watching the Carnegie concert, I felt a familiar old sensation of wanting to perform, sing, dance, write, act, anything that would make me come to life like Charles Aznavour is alive anytime, anywhere.

My God, he is eternal. He began in the business in the 1930s, before I was born. He is a five-foot-three model of beauty, soul, and being alive.