I wrote a little play about thirty years ago. It’s about a family whose relationships keep shifting. I had no coherent point of view in mind when I wrote it. I just wanted to keep the audience interested.

I got a call recently from a man who’s directing that play at a college in Northern California. Someone appears on a big tricycle — toward the end of the show. The director said to me, evidently accepting my silence as agreement, that the tricycle is a vehicle for the protagonist’s—I didn’t know I had a protagonist—for the protagonist’s attempt to reach homeostasis, “a stable state of equilibrium” according to my dictionary.

I filed that one away and didn’t think about it again until the next time I bought a new pair of shoes. The shoe salesman told me I take a nine-and-a-half-C. I explained to him that I’d always been a ten-and-a-half-D, ever since I was seventeen. The salesman insisted.

Okay. I had to consider the possibility that I’d been wearing the wrong-sized shoes for the past several decades; that all the other shoe salespersons in my life had been incompetent. I tried to keep an open mind. But the damned shoes just felt too snug. So I bought the ten-and-a-half-Ds. And now, right in that one little area of my life anyway, I have … homeostasis.

What a wonderful thing. I’m going to get myself a bumper sticker: HOMEOSTASIS IS WHERE THE HEART IS.

I keep learning life is change, of course. I can certainly see that’s true, watching people I know. From 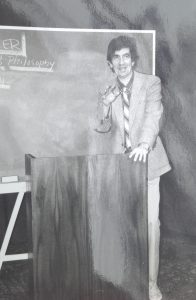 day to day, we all change. Between two average Mondays, I think most of us have shed at least seven new skins.

Still, I like the sound of homeostasis. It feels comfortable. You could role up into it like a blanket.

But like most of us, my mind never settles in one place very long—Buddha … was walking along a river bank one day and an old disciple of his came up to him and said, “Master, I’ve been following your teachings. I’ve worked for thirty years and look what I’ve learned.” And the disciple walked across the river and back. And he said to Buddha: “Do you see, Master? Do you see what I’ve accomplished?”

And Buddha said, “That’s terrific. And it took you thirty years to learn that?”

And Buddha held out his hand and said, “Here’s a nickel. I can take the boat.”

WELL, WHAT THE HELL WAS THE POOR GUY SUPPOSED TO DO THEN? He’d ALREADY learned to walk on water. He had to have worked hard to do that. What a crummy thing to say to him—“The consequence of this, my son, is that you’ve wasted thirty years of your life. Go and be happy.”

I personally like that guy for taking all that time to walk on water—if that’s what he needed to do. There are consequences to opening your mouth.

And so my epiphany for the day is: Homeostasis can be a wonderful state of being—something that leaves you feeling peaceful and never pinches your feet.

On the other hand, if you think your epiphany is going to work out for EVERYBODY you run into, you’re very likely wrong about that.