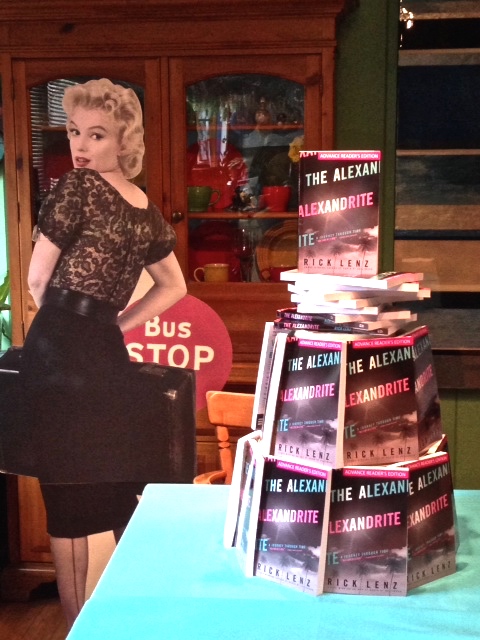 The Alexandrite: Review by Grady Harp
5.0 out of 5 stars`I am having a new and alarming sensation of the (forgive me, psychobabble haters) Now in my life.’

Format: Kindle Edition
It is not often that we find in an actor or writer or performer memoir with that element of truth that must be difficult to write – that stardom somehow escaped them. Rick Lenz has been around the block in the cinematic field and has had contact and interplay with many very famous people – most of which he shares in his entertaining and enormously popular book NORTH OF HOLLYWOOD. His book is more than a gossip column: Rick Lenz looks back at his life from childhood on through years of acting, trying out of major roles and losing them, acting on the stage and screen and television, writing plays and producing because all that happened.

Rick reaches for another star in this new book THE ALEXANDRITE, leaving memoirs behind and concentrating instead on a subject that is gaining more interest in literature – time travel – and that interest may possible be due to the preponderance of films and games and television series that deal with science fiction, as though this world is too much with us and escape to another time or dimension may just be the manner in which to remain calmly sane.
So what makes this diversion into another Rick Lenz winner? Simple. It is his magnetic style of writing, prose that approaches poetry on nearly every page, a story that utilizes Rick’s Hollywood connection, and the fact that, as in NORTH OF HOLLY WOOD, the people he creates (or celebrates…) are so well sculpted that should we pass them on the street we would immediately recognize them. That is a talent in which Rick basks.

A sample of his skill opens this book in1996: `At some unidentified point during the first time I live through the following events, it becomes as clear as my muddled brain has ever experienced clarity that most of us do not see what we see or hear what we hear; in fact, we can’t tell what’s going on right in front of us. As a result, few of us understand that life runs in a circle, that it’s forever changing, but always, always in a circle. And the reason for this is, if it wasn’t in a circle, if life went out in a straight line, it would take us away from each other. And that wouldn’t work because we are all connected, made of the same stuff. Most of us, to one degree or another, are terrified of the end of the path we’re on, never understanding that our path is a circle, and that it won’t end– because it can’t. Curiously– or at least I think it’s curious– what I have just said is something I’ve yet to learn, yet I already know it. Go figure.’

The synopsis outlines the chief facts of the story: `A time-travel noir that slips between the shimmering worlds of modern and midcentury Los Angeles. How many lives does Jack have to blow before getting it right? And is sleeping with Marilyn Monroe worth getting murdered again? When Jack Cade is fired from a no-pay production of Hamlet, he has no inkling his next role will be opposite Marilyn Monroe — forty years back in time, in 1956. As a down-and-out aging actor, Jack’s luck and life change when he’s anonymously sent a pawn ticket for an alexandrite ring. After his wife leaves him, a mysterious woman asks him to meet her at an old mansion deep in the San Fernando Valley. With nothing to lose, Jack decides to go. Once he steps through her door, he enters a world of beguiling physics and plain old magic to travel through time. Through a dark, glitzy whirlwind of events, Jack meets Marilyn, gets killed more than once, and emerges with the jewel that changes his destiny. He discovers the answers to all his life-and-death questions within the constantly shifting colors of the alexandrite.’

So we now know that Rick Lenz can likely enter any realm of story telling and succeed. This one finely tuned machine of a novel. Highly Recommended. Grady Harp