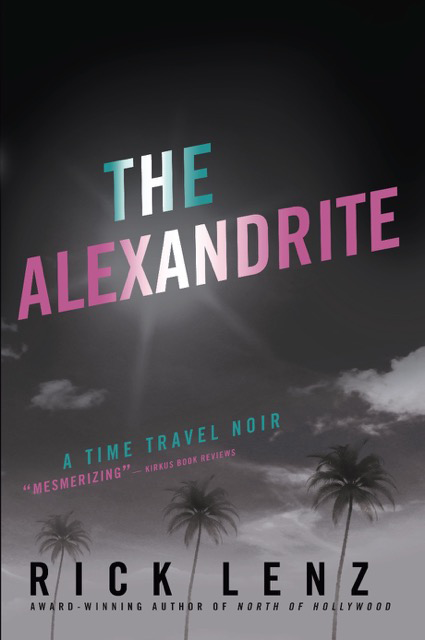 The ALEXANDRITE: a Hollywood Time-Travel Noir by Rick Lenz 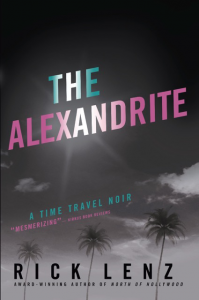 Time-travel Noir becomes High Art with a wicked sense of humor in this fast-paced novel that offers up alternate views of Hollywood’s past and present.

Washed-out and with the doors of opportunity slamming shut from all sides, actor Jack Cade is the poster boy for the “bad things happen in threes” mantra. Getting cut from a crappy, no-pay play was just the tip of his career-crushing iceberg. His agent, who lost faith in Jack way back in another epoch, manages to dig up a temporary life preserver – an audition for a part that has Jack written all over it. An audition he misses. And Jack’s wife, no longer able to stay afloat in his sinkhole of alcohol and “bleeding actor’s ego,” jumps ship.

Just when it starts looking like it’s lights-out for Jack, an anonymous envelope lands in his mailbox. Inside is a pawn ticket that leads him to an Alexandrite ring and a psycho-physicist who claims to hold the secret of time travel. With Jack’s personal and professional lives collapsing in on him like a black hole, he walks out of 1996 and into the heyday of mid-Century Hollywood. He also walks into another man’s shoes, not to mention the scene of his recurring nightmare. Armed with “fore-knowledge” Jack has a chance to make things right in two different time periods. The only question is, how many times will he have to jump across the spectrum of alternate reality to get it right?

Drawing from his extensive experience in the entertainment industry, author Rick Lenz delivers a stellar and believable cast of characters. From Jack Cade, whose love-hate relationship with the movie industry keeps him on the razor’s edge of failure, to Jack’s 1956 incarnation – or possibly alter-ego – Richard Blake, a movie-star handsome gemologist, whose an angry alcoholic wife and sultry, mentally impaired sister-in-law set the stage for their own rendition of a sweaty Tennessee Williams play. And there’s the incomparably complex, multi-faceted Marilyn Monroe, at the peak of her career—the golden thread that weaves everyone’s story together.

Steeped in Hollywood history and culture, The Alexandrite entices the reader with snippets of iconic set locations, facades, meeting places, studios and stars. But the novel is more than a torch song to the movie industry. It is also a paean to hard working actors whose careers, like Jack’s, straddle a razor.

Somerset Grand Prize award winner for Literary and Contemporary Fiction along with multiple other literary awards, The Alexandrite by Rick Lenz playfully challenges the reader to ask questions about a world that exists outside of the four dimensions in which we live. A must-read for anyone and everyone who has been touched by the magic of Hollywood.